A long while ago, I promised my mom I’d make a quilt for her. Now, lots of people have asked me to make a quilt for them, and I try to stress to cost and time it takes to do that, and usually this gets me out of it (I promise I do love making quilts, and making quilts for specific people, but gosh golly it can be a huge time commitment and is surprisingly costly – like in the hundreds of dollars range), but mom is a special exception. Like, duh. She said she wanted something simple and in just two colors – lavender and gray. Every pattern we looked at that she liked ended up being a pretty classic, traditional pattern like Jacob’s Ladder or a simple nine patch, so that’s what I figured I would make. But then the Downton Abbey line of fabric came out, specifically, the Dowager Countess line (this is no reflection on my mother, teehee). and I thought those would work perfectly.

For a while, at least. Then, in March, I went to the Dallas Quilt Show with my cousin and found this adorable bundle of lilac and cream batiks and my original idea went out the window. I collected a few more fabrics and slowly my idea evolved to where instead of gray, I was going to use cream, and in my head I had this beautiful watercolor-ish quilt planned, using the Carpenter’s Star pattern.

Even though I’m rather “meh” about most batiks, I thought these looked lovely.

So I got them all pressed and starched, and tried several different pairings to make sure that the fabrics would look nice next to each other, and then started cutting away. 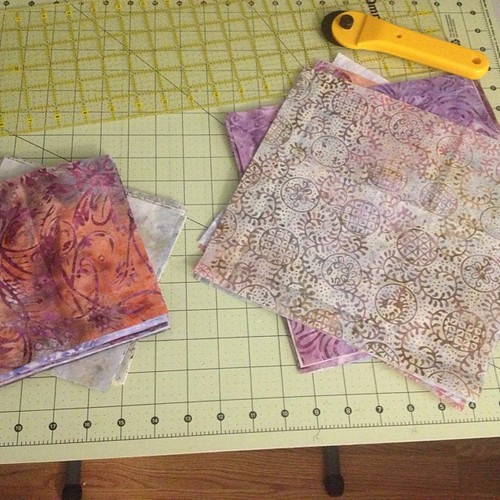 So far so good. I even tried a new technique where to get a 6.5″ square made of two HST, I cut two pieces 10″, sewed all along the outside, and then cut the 10″ block diagonally each way, like this – 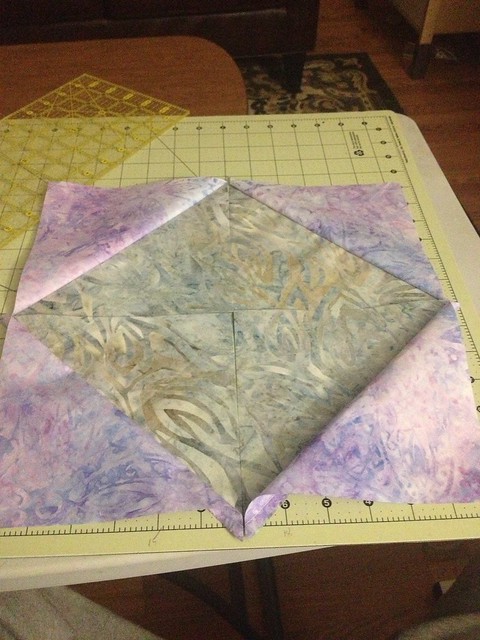 Then I laid then all out in the Carpenter’s Square pattern, and it was awful. Just… horrible. I could have cried I was so disappointed. There was no way, with what I had cut, I could salvage it to my liking. But I liked this fabric, even if some of my fabric combinations weren’t working, and I thought I could salvage this in some way, by trying a different arrangement.

So here are a few different layouts I’m considering. I may need to cut some more fabrics to get it perfect, but I have plenty and this is a start. 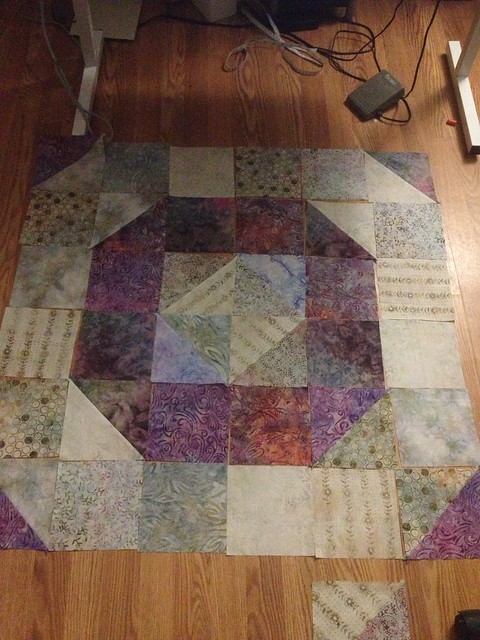 Idea 2, which I like more and will probably go with (extending the borders out a bit, since this only uses about a quarter of my cut fabric) 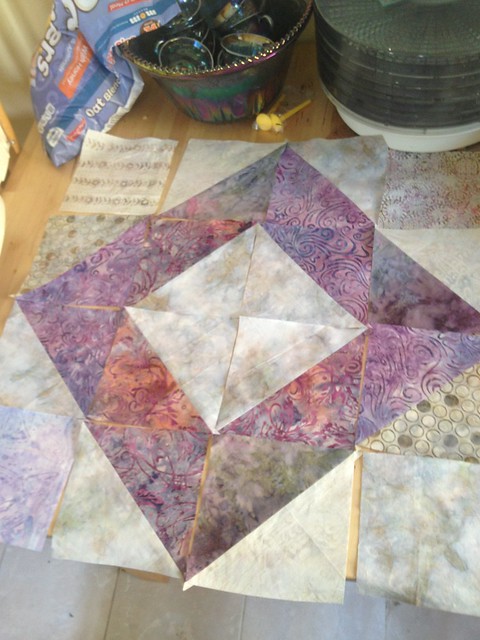 I didn’t even take a picture of my original, the Carpenter’s Square. It was terrible. I couldn’t commit it to camera because it was so bad I never wanted anyone to know I actually thought it might turn out well. (Seriously, Bria. What were you thinking?!?)

Still, neither of these new configurations are screaming “This is a beautiful quilt!” My SIL saw them and said they’d look amazing in 1987, which is a little harsh (only a little though), because there is a part of me I suppose that’s perfectly at home in 1987. Just kidding.

Anyway, the most important thing is going to be whether or not my mom likes it, because if she does, it doesn’t matter one bit whether or not I feel like these represent my artistic direction or nonsense like that. It’s my MOM.

In fact, this may turn out okay in the end. With a simple, even plain piecing configuration, I now have a great canvas to try some really lovely quilting. I thought I might grab some big medallion stencils for this to try something new.

And if mom hates it, she can use it as a table runner for a while or something, and I’ll make her a proper quilt in the fabric scheme she originally asked for.