Last week we packed up the boys for our first real road trip and vacation as a family of four and it was… illuminating? Exhausting? Something like that.

We left Tuesday morning and all was well. We fed the boys some breakfast from Chick Fil A, and like most other times, they didn’t really eat anything and the chicken got lost on in the back of the car somewhere and we still haven’t found most of the chewed up pieces. They slept fairly well until we got to Texarkana, where we thought it was a good idea to get Chick Fil A again for lunch. While I like their chicken sandwiches, two meals in a row is just too much. Too much. The boys played at a park while we ate to burn off a bit of energy. We realized at this point that Kostya had not used the restroom before we left, which was a big oversight on our part, as he had peed sometime before Texarkana. Luckily, I was a super great and prepared mom and had packed several extra changes of clothes for both boys.

On the second leg of our journey, from Texarkana to Hot Springs, we discovered that Yuri gets carsick! Especially on a full stomach. I heard him cry and cough in the backseat, and then we heard the gurgle and splat as it all hit the back of his seat, so we had to stop and change him and I nursed him for a while. The  outfit was a goner, so I just tossed it and opted for naked (except for the diaper, of course), so I wouldn’t use another outfit in case he needed to vomit again. Luckily, he didn’t.

We arrived at Hot Springs in good time, and our hotel, The Arlington, was gorgeous, and one day I might actually read the history on it. It’s located right on the main street of Hot Springs, at the end of Bathhouse Row. We’ve actually been to Hot Springs, before, two years ago, but we were not able to get a room at the Arlington because Hot Springs hosts horse races, and we weekend we went there were races, and all of the rooms at every decent hotel we booked, so we had to stay like five miles out of town. It was definitely worth staying at the nicer hotel because we didn’t have to drive anywhere this time. All the restaurants and other places were within an easy walking distance.

Here are some terrible pictures of the hotel 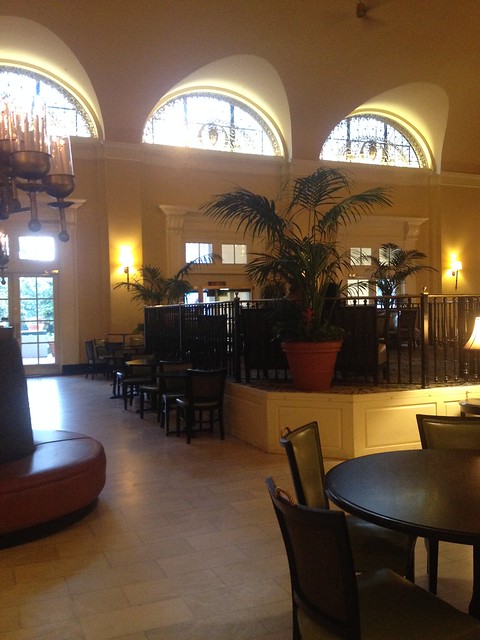 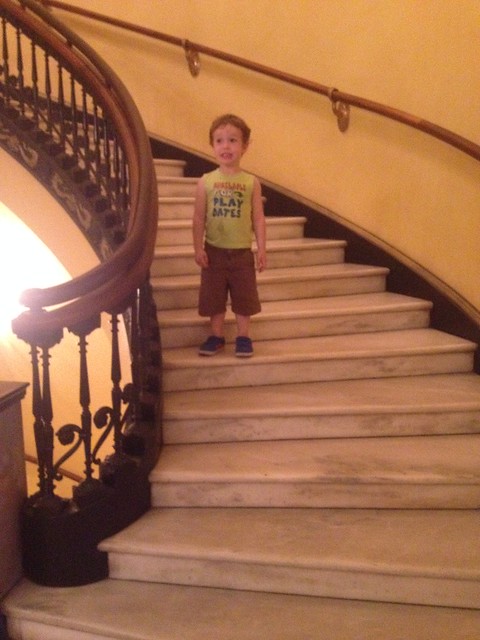 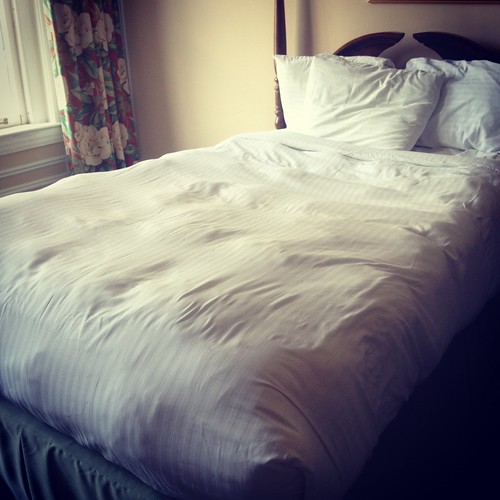 Our bed was lumpy, but they were really quite comfortable.

We checked in and went to our room. The hallway was definitely channeling some creepy Doctor Who vibes

By now it was almost evening, and we were all hungry and ready to walk around, so I went to change from my gross and sweaty t shirt and skirt into one of the few cute things I brought to wear for dinner, only to find out that Yuri, the night before, had unpacked a lot of my things and I only had about half of the clothes I thought I had packed. So I was stuck in frumpy t shirts and skirts. Sigh. Kids. We found a delicious Cuban place and I can’t remember the name (sorry), and the food was SO GOOD, but I got indigestion because of the stress of worrying about whether or not the boys could be entertained long enough before they exploded. Restaurants haven’t been good to us recently. Lots of prayers were said and answered, and we actually finished the dinner and received compliments from other patrons and some wait staff. We went back to the hotel and hung out, and I worked on some sewing handwork. 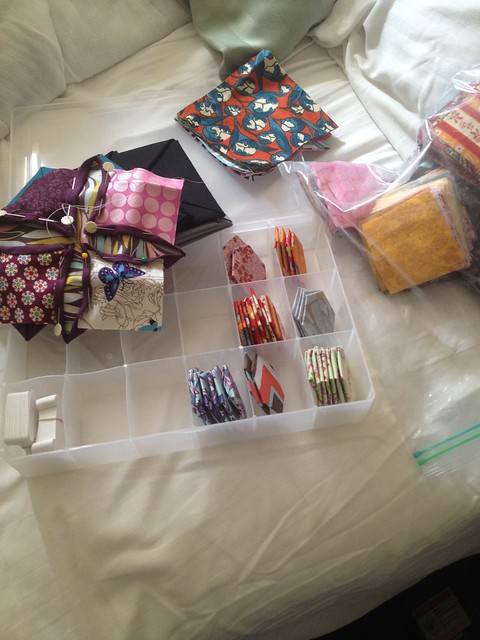 We woke up the next morning way, way too early and ate at a place called Pancakes, which for a place called Pancakes, was pretty good but not like, amaaaaazing. I love eating out for breakfast food, but Wafflehouse is almost always better than any other place. After breakfast was a visit to a small aquarium (for the kiddoes) across the street. There they had a tortoise named Slowpoke who walked freely. The kids liked her. My stomach was bothering me again so I went back to the hotel. Like home, the bathroom door didn’t shut all the way so I had no privacy. Just like home. Children are gifts from God. Then a nap happened, Alleluia. We took the boys for a swim in the pool on the 7th floor, but the water was too cold for me, and Yuri hated the hot tub, and then he found a katydid bug that scared him after it buzzed and everything fell apart because he kept trying to throw himself down stairs, so we decided swimming was out, and it was time for dinner!

This time we opted for this delicious italian place called Angel’s. It was some of the most flavorful italian food I’ve ever had, and they do not skimp on the garlic. Not in the least. It’s excellent. Like every other meal, James and I sat through it on the edge of our seat, trying to prepare ourselves for tantrums/broken items/thrown food/the apocalypse, but amazingly, we made it through. There were some close calls, but fortunately we were seated out of the way from everyone, so no one noticed.

At this point in our evening, despite the weather forecast predicting just a “cloudy, breezy” day, the sky opened up and it poured. We were a good four or five blocks away from the hotel, with no umbrella or cover for the stroller, and it was a serious, soaking rain that didn’t look like it was going anywhere for hours. We decided we were just going to run it, so I strapped the kids in the stroller and took off. We got soaked nearly immediately, and Yuri started to cry, so James took him out and carried him while I ran with Kostya, who also started crying.

It’s hard to see in this picture, because I’m a terrible photographer, but this was actually after the storm had lightened up, and it’s still solid rain. 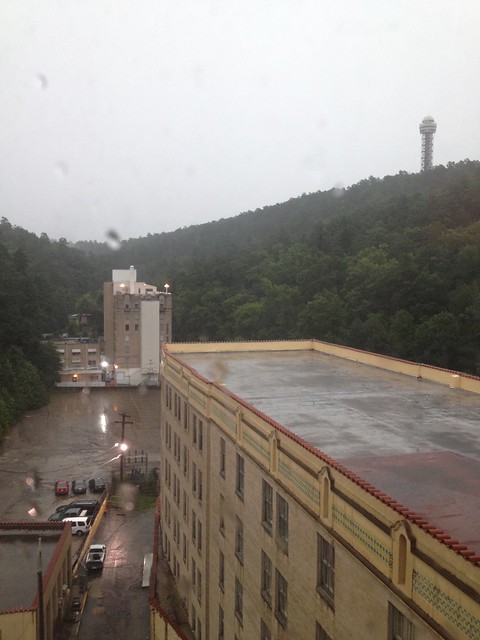 Yuri was so unhappy. 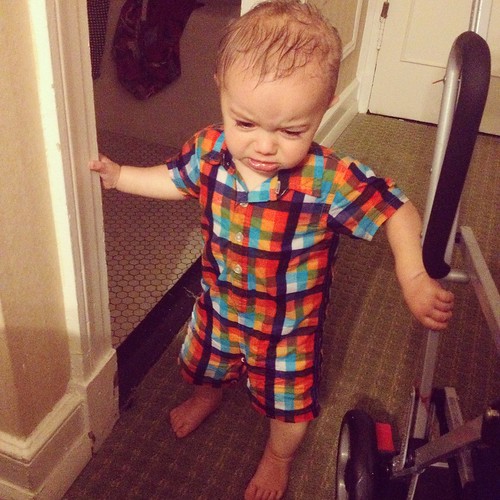 At this point I had no clean clothes and we needed warm baths, so I was gross. Originally, I had thought we might be able to stay an extra night, but food costs, lack of clothing, and the inability to relax in any way cut that idea out. I had also intended to hit up the in house spa, but that never happened, so I had to settle for a bath in the hotel room (can’t complain too much – the tubs were huge and the water so so hot and wonderful), but because the door didn’t latch, Yuri could come in, so I spent my bath trying to deflect all the random objects he kept trying to throw in the tub.

James and I ordered coffee and chocolate cakes from room service, we managed to get the kids to sleep at 11, and went to bed. James was able to sleep, but Yuri is growing four teeth at the same time and so I didn’t really sleep at all. We checked out the next morning, had some Wafflehouse on the way out, and I was a zombie for the rest of the way. Yuri slept the whole way home, though, so that was good.

So, things I learned – vacations with small children are not relaxing at all. We had fun, the boys seemed to enjoy themselves, but James and I are definitely going to try for an us-only overnighter at some point. Children are really good at doing things that could probably kill them, and that’s stressful.